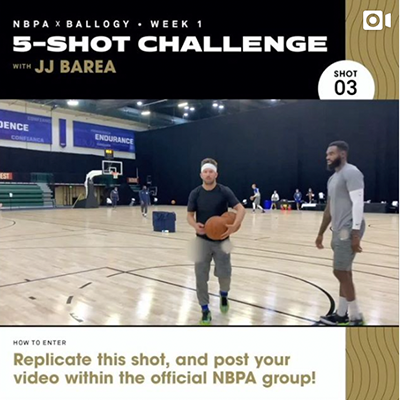 The NBPA and Ballogy launch collaborated back on August 25th with the NBPA x Ballogy 5-Shot Challenge, where fans worldwide can test out their trick-shot abilities by matching shots taken by Union members and basketball influencers.

The 5-Shot Challenge launched with one time NBA Champion, J.J. Barea, who brought his A-Game with some tough shots he made during the resumption of play in the NBA Campus at Walt Disney Resort. Barea, a career 35% shooter from deep, is well known for his long-range marksmanship, but the 5’10” guard showed that he is more than a perimeter threat with his first shot in his appearance on the Ballogy App. Barea’s left-handed (his off-hand), reverse layup off the glass was quite the start for his week of trick shots, as it forces players to work on creating and using angles off of the backboard. While the NBPA x Ballogy 5-Shot Challenge is meant to be fun and a way for kids to express themselves on the court, it also provides kids an opportunity to work on their game by taking and making some challenging game-winning shots.

Barea’s fourth shot for the week featured him taking an unusual approach to make a free throw. The guard bounced the ball from the free throw line, banked in the shot, and acted like it was just another typical shot for the career 80% free throw shooter to hit.